CALL 7, Incorporated offers our clients Nation Wide telephone service provisioned on a Global Network, proven and tested to within 99.999% reliability, with true geographical redundancy. Our service is built on advanced carrier-grade telecom platforms, designed to support both Smaller and Enterprise clients as well as Non-Profits. Our service will scale effortlessly, offering a suite of advanced telecom features scaled for affordability to any size organization.

We offer Small Business our Revolutionary LOW COST ICON Based easy to use platform which lets you do business your way from any Android or iOS device. Our easy-to-use Web Based Graphical User Interface provides Smaller Companies with a power yet very easy to use management Portal. Your company will save up to 50% over other providers. Why Pay More, For Less?

CALL 7, Enterprise offers any size Business, Organization and Non-Profit, with the World's most Advanced service. Used by over 500,000 clients our MaX-UC is now owned by Microsoft. MaX-UC empowers you to customize every part of your phone service. No ISP or CABLE service provider offers the powerful suite of features our Enterprise service offers: A Powerful Desktop and Mobile App with the ability to Transfer calls and see, who is available; Built-in Instant Messaging; Chat; Zoom Teams Collaboration and most importantly: Text Messaging to and from your Desktop and Mobile Apps. 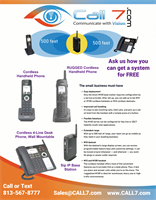 Get a 4-Line Phone System for FREE! Ask us How.

Email Sales@Call7.com to learn more on these Amazing Devices.

Larry France, is the President of CALL 7, Incorporated. Larry owned France Business Systems, a Toshiba Copier Dealership, from 1983 to 1994 when it was sold to Lanier Worldwide.  Larry Joined MCI Telecom in 1995 and remained with MCI until 1998, when Larry became VP of Channel Sales for Intermedia Communications.  Larry partnered with Communications Xchange (Commx) in 2002 to handle retail sales nationwide. Commx was the largest provider of Cloud Phone Service in the World in 2006. Larry started CALL 7, Incorporated in June of 2009, offering advanced Business Phone service to companies of all sizes across the U.S.
Larry was born in Syracuse N.Y, and went to Syracuse University.  Larry moved to Daytona Beach FL, with Jennifer  in 1978 and has remained in Florida since. Larry was a licensed Telecom Consultant, and is known across the U.S. as a pioneer in Hosted Voice ( also known as  Cloud Phone Service).